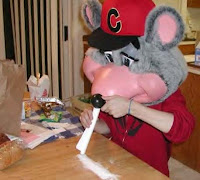 HOW exactly does a trip to Chuck E. Cheese end in a brawl? We can certainly understand some parents snapping but but this is different. A sextet of Illinois meatheads are facing charges that left a man with a puncture wound in his chest, a $3000 arcade game flipped over and an army of puzzled kids.
According to cops, the brawl began after a dispute, nay a point of honor, was made over the use of an arcade game. Then all hell broke
loose, cops were called, patrons fled. Brawlers busted. Then... then their female companions began slugging it out.

Chuck E. Cheese general manager Barbara Schmeissing said the men have been banned from the restaurant, police said.  You think?
MORE ON CHUCK E. CHEESE DONNYBROOK
Posted by Crime Scene USA at 6:45 AM