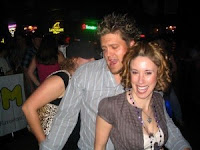 AS ANOTHER week in the Casey Anthony murder trial wrapped up, her defence team are starting to try and rip holes in the prosecution's case. Read: they're trying to plant the seeds of reasonable doubt. We say, 'good luck dude!' Florida Party Mom Anthony, 25, is charged with first-degree murder in the 2008 slaying of her toddler daughter Caylee. If convicted, she will likely get the needle. On Saturday, Dr. Werner Spitz said that the duct tape found on Caylee's skull was placed there AFTER decomposition. The prosecution has claimed that the little girl was suffocated by the placement of the duct tape over her nose and
Read more »
Posted by Crime Scene USA at 10:06 AM No comments:

NO BODY OF MAN WHO ACCIDENTALLY KILLED GOTTI SON: In the pantheon of departed victims of the late Gambino mob chief John Gotti, few episodes are as heinous as the murder of John Favaro. A neighbor of the Gottis in Howard Beach, Queens, the hard-working factory employee and father of two accidentally struck and killed Frank Gotti, 12. Cops found no wrongdoing. Favaro was abducted several days later and never seen again.  NO GRAVE FOR SON OF GOTTI VICTIM TO VISIT

TWO Italian jailbirds have testified that Amanda 'Foxy Knoxy' Knox was NOT involved in the slaying of British student Meredith Kercher. However, according to CNN, they differed on who the real killer is. The Seattle exchange student was sentenced last year to 26 years in prison for the death of  Kercher at a house the two shared in Perugia, the central Italian town where both were students. It was theorize Kercher was killed when a sex game went awry. Knox has also maintained she is innocent.
MORE ON FOXY KNOXY
Posted by Crime Scene USA at 8:40 AM No comments: