THE MAN accused of executing four people in a Long Island pharmacy during a robbery for painkillers has pleaded not guilty to first degree murder.
The 33-year-old is accused of walking lining up workers Raymond Ferguson, 45, and Jennifer Mejia, 17,  and customers Bryon Sheffield, 71, and Jamie Taccetta, 33 and killing each one with a bullet to the head.
It's thought he wanted the Hydrocodone tablets because he and his wife Melinda Brady were addicted to

CHECK IT OUT. Boy, 7, decides he's going to see his dad--20 miles away. Steals stepfather's car. Leads cops in Michigan on a chase in a  red Pontiac Sunfire.
Quote of the day, call to 911: "Uh, yes, I'm on Kinde Road outside of Caseville, and believe it or not, I just passed about a 5-, 6-year-old kid flying down the road with a red Pontiac Sunbird."
Posted by Crime Scene USA at 9:11 AM No comments: 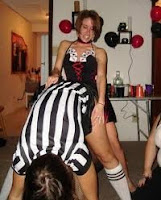 WHEN YOU lost mom and dad, you now you're in big trouble. In a shocking interview with CNN, the lawyer for the parents of Party Mom Casey Anthony said they think she's guilty but DO NOT want to see the swinging floozie get the death penalty for the sickening crime that has riveted the world.
Mark Lippman said of George and Cindy Anthony: "But this is important and they wanted me to stress this. They love her, they support her and they do not want her to get the death penalty and they will do all they can to avoid her getting the death penalty in this case."
Ah, but they may not have a say. Anthony, 25, is now on trial in Florida for first-degree murder in the brutal 2008 slaying of her 2-year-old daughter Caylee. If she is convicted, in all likelihood she will be frog marched to death row. Testimony is expected to continue today.

Read more »
Posted by Crime Scene USA at 8:50 AM No comments:

HOW RILEY CHOATE WAS NABBED IN SON'S MURDER 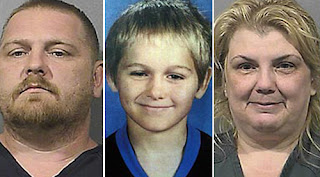 IT IS AN OFT-REPEATED cliché that time is of the essence but never was it more apt than in this cold case in Indiana. Lake County Sheriff's Department (LCSD) Deputy Commander of the Detective Bureau Matt Eaton’s interest was tweaked one night when he overheard a call from police dispatch to a patrol officer while on his way home from the gym, according to The Gary Post-Tribune.
The call came from the home of Gary, Indiana resident Aimee Estrada. Estrada, biological

SPIDERMAN star Tobey Maguire is in web of Hollywood A-lister's who are being sued for their winnings in an illegal, underground high stakes poker game.
According to the suit Maguire won cash from the CEO of Ruderman Capital Partners, Brad Ruderman, who was gambling with company funds and lost $25 million of his investors money in the clandestine games.
The now disgraced hedge fund manager is said to have to lost $300,000 to Maguire, was sentenced to 10 years in jail in January 2010 for operating a wire fraud and investment adviser fraud scheme.
Now Maguire is being sued by the trustee of those who lost money in the scheme.

WHACKED out dope fiend David Laffer who brutally executed four people in a Long Island Pharmacy has always been a gun nut according to family and friends.
Growing up, his father who passed away in 1996, was an active member of the NRA, so the degenerate drug user, who allegedly stole, 10,000 Hydrocodone pills before his brutal slaughter, had learned about weapons young.
Then he served in the army from 1994 to 2002, where weapons training would have been mandatory.
In several Internet postings, Laffer claimed to have served in a military intelligence unit in the Bronx under Ronald Bucca, a heroic fire marshal who was killed on 9/11.

JACKASS Ryan Dunn was drunk and speeding up to 140mph when his Porsche careered of a highway and blew up in a huge ball of flames, cops have confirmed.
Toxicology reports showed the ginger bearded star's  blood alcohol level was more than twice the Pennsylvania limit of 0.08 at 0.196.
But while the manager of Barnaby's in West Chester confirmed that a tweeted photo showing Dunn with a drink his in hand was taken at the bar, he claimed that he didn't seem drunk when he left.
He added: "Ryan was not a hardcore drinker, at least not when he was here."
Dunn's car was found almost just a mile away from the bar by cops who described it as "fully engulfed in flames," when they arrived.

NOTORIOUS mob boss James "Whitey" Bulger has been sensationally captured after nearly 16-years on the run.

The FBI caught up with  onetime pooh-bah of the notorious Winter Hill Gang - and inspiration for Jack Nicholson's whacked out gang chief in The Departed - living happily with his longtime girlfriend Catherine Greig, 60, in Santa Monica, CA.
He was arrested without incident and it's thought he will now be returned to Boston where he is wanted for the murders of 19 men and women along with a litany of other charges.

SELF HELP Guru James Arthur Ray has been found guilty in the deaths of three people in an Arizona sweat lodge.
The best selling author of The Secret told people they would find enlightenment on his "Spiritual Warrior" retreat, if they entered the in the lodge, made of willow trees and branches, and covered with tarpaulins and blankets.
He warned participants in a recording of the event played during the trial that the sweat lodge would be "hellacious" and that participants were guaranteed to feel like they were dying but would do so only metaphorically.

PM UPDATE: She skates again. And wow, is Samantha Ronson ever unattractive. 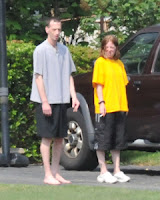 THEY WERE a pill-popping Bonnie and Clyde. And in the end, cops suspect David Laffer massacred four innocents at a Long Island drug store on Father's Day for love. The gun-loving US Army vet, 33, and his 29-year-old wife Melinda Brady were both charged in the chilling slaughter that shattered Medford, NY. He was hit with first-degree murder and she with third-degree robbery. They were busted Wednesday. Both were described by cops and acquaintances as degenerate pill poppers. He had recently lost his job and benefits.
Sources are telling the New York media that detectives