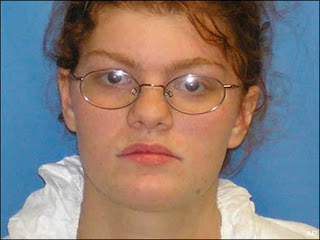 EVIL TEEN killer Angela Marinucci has been found guilty of murdering a love rival with special needs. It took the suburban Pittsburgh jury just four hours to convict the villainous vixen.
Just 18-years-old, court heard that Marinucci was one of the ringleaders in the torture slaying of Jennifer Daugherty in January 2010. The teen terror went down for first degree murder, second degree murder, third degree murder, two counts of conspiracy and one count of kidnapping. The convictions carry with them an automatic life sentenced.
Daugherty's family remain devastated since the horrific murder.

KILLER MOM JULI McCRERY 'HAD A LOT OF PROBLEMS' 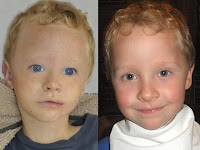 IN A MASSIVE statement of the obvious, an ex-boyfriend of accused killer mom Julie McCrery said she "had a lot of problems." McCrery, 42, is charged with murdering her 6-year-old son Camden Hughes and dumping his body on a remote road in rural Maine. She has a history of suicide tries, drugs, prostitution arrests and a generally woeful life.
McCrery was arraigned in Portsmouth, N.H. Thursday on second-degree murder charges. She sobbed throughout court proceedings.
According to the Boston Herald: The charges marked the horrific end to the life of a boy born to a deeply troubled woman. Murphy said his
Read more »
Posted by Crime Scene USA at 12:14 PM No comments:

THIS is the moment when an evil teen mom tried to kill her baby son so she could "return to her carefree life.
Placing  a blanket over the four-month-old, Shantaniqua Thomas, 18, then clamps her hand over Raymond's mouth and watched as the newborn baby kicks and struggles for life. By the time the single mother removed her hand, the newborn's body appears limp.
Seconds later with alarms going off indicating the baby had stopped breathing, doctors and nurses rush in to resuscitate him
The shocking footage was played to a shocked courtroom in Waco, TX

A SPANKING businessman who  promised to help struggling women out of a financial black hole as long as they agreed to be spanked if they broke his rules, is now facing sexually assault charges.
In one of the most bizarre cases in Virginia Beach's history, Henry Allen Fitzsimmons gave each of the women $200 weekly, promised to pay for their college tuition, treated them to lavish nights on the town.
He even bought one a car as part of his so-called Spencer Scholarship Plan.
But if they broke his rules like failing to call him or drinking too much alcohol, they were spanked.
Now however, at least six of the women say his corporal punishment went too far, including one who says the 54-year-old sexually assaulted her.
One 21-year-old woman testified Thursday that the day she joined the program

IS his marriage terminated, is he expendable and will a predator divorce lawyer enact judgement day on him? All remains to be seen but Maria Shriver has reportedly hired a hotshot Hollywood divorce lawyer but
hasn't decided yet whether she wants to legally split with Arnold Schwarzenegger after he admitted that he fathered a love child with a member of his household staff.
Mildred Baena, known as Patty, had worked for Schwarzenegger as an assistant and housekeeeper for more than 20 years.
Apparently she threatened to go public with

Read more »
Posted by Crime Scene USA at 6:04 AM No comments:

"SATAN HIMSELF" MACHETE MANIAC GETS LIFE

A MACHETE wielding gang member who was part of a group which brutally hacked to death and shot four college bound students has been called "Satan Himself" by the mother of one of his victims.
Baby faced assassin Alexander Alfaro, now 20, was just 16 when as part of a six member Ms-13 street gang he launched a vicious attack on Dashon Harvey, Terrance Aeriel and Iofemi Hightower who were shot to death in Newark, NJ. 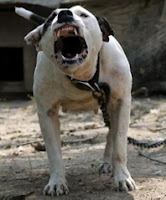 A PREDATORY pitbull followed kids to a school bus stop and viciously attacked them leaving five of them injured.
The deranged dog followed and then ran on board the bus when it stopped, biting and attacking any child it could sink its teeth into.
"It was trying to bite everybody," said one student.
"It was running back and forth. It was scary."
When Prince George County, MD, officers arrived one of them shot and killed the dog to protect the children.
Animal Management Chief Rodney Taylor said: "I think once he followed that kid on the school bus, and all the kids got excited and hollering, the excitement alone can actually send an animal into another mindset."