CHARLIE SHEEN appears to be enjoying some of that celebrity justice. Despite new charges the troubled porn star loving thespian threatened his estranged wife, so far there's no probe.
A California judge did issue a temporary restraining order stopping the "Two and a Half Men" star from having contact with his children and keeping him at least 100 yards away from his ex-wife Brooke Mueller.
Blonde Mueller claimed the Meltdown Man told her: "I will cut your head off, put it in a box and send it to your mom!" Sheen also suggested using child-support money to take out his enemies. Oh, and he also threatened to stab her in the eye with a pen knife.

GIRL, 13, WAS HIDING FROM ARRANGED MARRIAGE

COPS SMELLED A RAT. And it was mom. After spending more than a week in a desperate search for a missing California girl, 13, detectives determined she was running from an arranged marriage in Pakistan.
According to cops, Jesse Bender's family had led them to believe that she had run off with a man she had met online. She had been reported missing from her home in Hesperia Feb. 22. Melissa Bender told detectives her daughter had run off with someone she had been communicating with on Facebook and that she didn't want to go on a two-month vacation to her father's native Pakistan.


San Bernardino Sheriff's spokeswoman Cindy Bachman said: "All that information was misleading. Whoever she was communicating with online was not a threat to her."

THIEVIN' MAKES a man hungry. At least it did for former Pizza Hut employee Cory Mogen. Seems likes Cory got a mite peckish and really wanted some Pizza Hut. What's a boy to do? The totally hammered 21-year-old decided that he was not going to let a closed sign stop him. So he broke in and that's where cops found him: cookin' up some chicken wings.

"They booked him and held him on burglary," says St. Cloud Minnesota Police Sgt. Martin Sayer, noting that the student has yet to be charged. "Today would be his first court appearance."

NO PAROLE FOR FORGETFUL RFK TRIGGERMAN 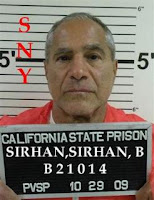 UPDATE: Robert F. Kennedy assassin Sirhan Sirhan has been turned down for parole. The killer who shattered a nation's hopes and dreams has been in jail for nearly 43 years. The California Parole Board says the triggerman has not shown sufficient remorse or understanding the national heartache he unleashed. Sirhan told the board he had regrets but also, could not remember pulling the trigger.

MORE ON SIRHAN SIRHAN
Posted by Crime Scene USA at 9:06 AM No comments:

HE'S definitely not going to be writing any parenting books anytime soon.
Most fathers would probably want to steer their kids away from a life of crime, but James Tindell took his kids "to work" with him.
With his five-year-old and toddler in tow, he walked into the convenience stores and calmly held them up with box cutters.
Then he fled with cash in his dark green SUV, looking to all the world like a good guy dad taking his kids on a day out.
Florida's Orange County Sheriff's Department says his toddler son in the car with him when he robbed at least two Orange County convenience stores Monday.
When they responded to on
Apopka police arrested Tindell late Monday night and say his son was in the SUV with him at the time of the arrest. 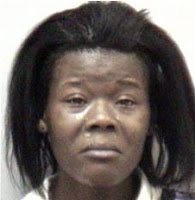 A MISSISSIPPI mom has been busted after cops found her three-year-old son's charred body in an oven.
Even hardened detectives were sickened by the scene that greeted them at Terrie Robinson's Greenville apartment when they found the still warm body of Tristan shortly after midnight Wednesday.
An autopsy has now been ordered to find out whether he died before or after he was put in there.
Greenville Police Chief Freddie Cannon said Robinson, 24 was charged with murder, adding that there was so trauma to the boy's head.
He added:  "This is a really sad moment for me. I've seen a lot of things, but this is one that will stick in my memory for a long, long time," Johnson said.

ROLLING Stones legend Keith Richards' daughter has been busted for surprise suprise possession of drugs and scrawling graffiti on a convent wall.
NYPD cops picked up Theodora Richards, 25 after they spotted the fashion model writing "T-Heart-A with a red marker on the side of the St Anthony's Convent.
When officers searched her bag they found marijuana and Hydrocodone pills, which the self confessed bad girl admitted she had bought from a dealer.
"I hope I don't get into trouble for this," Richards  who has sported designer duds in a number of fashion

A 12-year-old boy is prime suspect in a brutal family slaughter which saw his parents die and his sibling injured by gunfire.
Cops arrived at the bloody scene in eastern Colorado to find the bullet riddled bodies of Charles Long, 50, and his wife Marilyn, 51.
A five-year-old girl and a boy, nine were also found injured at the deeply religious family's Burlington home.
It's in unknown whether boy, who called 911 to report that three people had been shot was injured during the incident.
While the case warrants are sealed and authorities are refusing to discuss possible motives, Steve Johnson of the Colorado Bureau of

A TWISTED  couple who pimped their 14-year-old daughter for a minivan have admitted trading sex with her to get the car.
The pair who we will not name to protect the teens identity made her perform "sexual favors" with car dealer Robert Wayne Bearden for the 1998 Dodge Caravan.
Bearden, who was manager of Shorty's Used Cars in Eastman GA in 2010, then waved the monthly $281

Read more »
Posted by Crime Scene USA at 4:32 AM No comments: