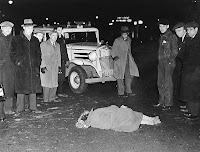 CRIME SCENE USA is pleased to announce that we will soon be launching a brand new blog: Cold Case USA. Cold Case USA will focus its energies on America's unsolved crimes, missing people and most wanted criminals. Stay tuned!
Posted by Crime Scene USA at 8:59 AM 1 comment: 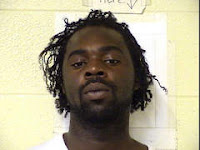 CHARLES 'Hot Head Charlie' Sims isn't much for air conditioning. Just ask poor Jimmy Parker. Cops in Chicago say that 'Hot Head Charlie' shot Parker eight times on June 2 after unraveling because of a dripping air conditioner. Apparently Sims' sister bitched that Parker dropped water on her from his apartment window above hers. Well, it wasn't Jimmy: it was the air conditioner dripping condensation. Poor Jimmy was only visiting a lady friend. Charlie confronted bewildered Jimmy about the slight outside the building. Parker denied it. Hot Head Charlie hit him. Parker hit Charlie. Sims pulled out Mr. 9mm and shot Parker. Then finished him off. Det. Jim Noradin said: “He administered a coup de grace of sorts."

Six witnesses have Hot Head Charlie as the shooter. Sims has denied involvement in the shooting.
Posted by Crime Scene USA at 8:16 AM 1 comment:

CHICAGO TEEN Danielle Dennis-Towne had hoped to join the military in the fall. Instead, she is lying dead in a Virginia morgue, allegedly murdered by a friend.
Cops say blood and personal items found on a rural trail have led them to charge Enrico Luciano Mascaro, 19, with murder in the death of his friend Dennis-Towne. The two had been reported missing and authorities have not yet ID'd the body but sources say it is pretty blonde, Danielle Dennis-Towne. The body was found in the trunk of 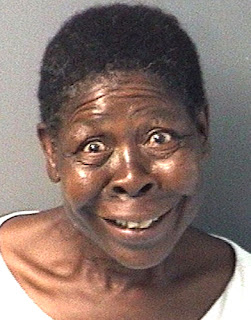 IS THERE much more to say. Again, we are totally in the dark about this lovely woman did--or didn't do. What we do know is that we sure like that mugshot and her life-affirming attitude.
Posted by Crime Scene USA at 7:43 AM No comments:

A THREE-year-old girl has been placed into the hands of a sex offender by a Florida judge.
Miranda Wilkerson was being cared for by her grandmother but now a judge has awarded custody to her father even though court records show he pleaded guilty to a sex crime involving a child under 16 and was ordered to register as a sex offender.
Her grandmother Rita Manning, who had previously been awarded custody is outraged at the decision.
She told WJXX: "She's been with me since she drew breath. Her whole world is here. How could a judge do that?"
Read more »
Posted by Crime Scene USA at 6:41 AM No comments:

THE CASH Cab turned killer in Vancouver on Friday, when the fake taxi used in the Canadian version of the show struck and killed a pedestrian. Cops say the 61-year-old man was hit in the city's Downtown after the show had finished filming for day and was being driven back to a storage facility of Castlewood Productions, which produces the show.
Company president Andrew Burnstein said: "Our thoughts and prayers are with the victim and his friends and his family. My heart also goes out to the driver of the vehicle, a member of our technical staff, who is shaken and devastated by this tragic accident, as is our entire team."
VPD spokesman Const. Lindsey Houghton told the Vancouver Sun:

IT should have been the happiest day of her life, but instead she spent at least some of it behind bars after she was arrested minutes after walking down the aisle.  Tammy Lee Hinton had just exchanged vows at a Jackson, MI church, when officers swooped, busting her on a three-year-old warrant for identity theft.  Blackman-Leoni Township Public Safety Officer Rick Gillespie told MLive that they believed the woman had moved to Florida, but they got tips that she would be back in town for the wedding.
He added that officers had discussed whether to arrest the woman on her wedding day, but felt like they were out of options.
He said: "We can’t ignore it when we have good information on where she’s going to be. We had to do what we had to do.
Read more »
Posted by Crime Scene USA at 5:37 AM No comments:

A EVIL pair held a 15-year-old boy at knifepoint, burned him and then glued his lips together, while filming their torture with an iPod.
Cops found the terrified youngster, naked and hiding under a bed in a Manchester, NH, housing project, shaking and “attempting to scream but his mouth wouldn't open.”
Later when cops were able to interview the youngster, who's name has not been released because he is a minor he told them that he knew one of his attackers, Ismael Bangs, 19, but not his pal Yvens Luclaise 25.
After 'hanging out' he says that Luclaise locked the door and started filming with his iPod.

Read more »
Posted by Crime Scene USA at 5:13 AM No comments: