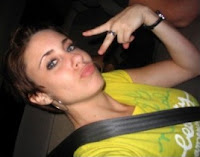 SATURDAY'S Casey Anthony Show was over almost as soon as it began. Judge Belvin Perry said after meeting lawyers that the day's testimony would be scratched.
Legal analyst Linda Kenney Baden said: "Obviously it's big, and obviously it's troublesome and obviously it's something that can't be disclosed." Relations between the defence and prosecution have been less than collegial with the D throwing out some fairly wild theories. Meanwhile, the prosecution has been criticized for overtrying the case (smell expert, anyone?) Party Mom Casey Anthony, of course, as even

* HOLLY BOBO'S MOM BEGS FOR HER RELEASE: It's been more than two months now and still no sign of pretty blonde Tennessee nursing student Holly Bobo. Have the cops dropped the ball? The TBI says no but there has been NOTHING new in weeks. Yesterday, a motorcycle run in the 20-year-old's honor was held. Her heartbroken mom said: "To whoever has our daughter, I'm asking you to please do the right thing and let her come home." STILL NO SIGN OF HOLLY BOBO.
* VICTIM OF PILLHEAD DAVID LAFFER BURIED IN WEDDING DRESS: In a Long Island church Saturday hundreds sobbed for Jaime Taccetta--buried in her wedding dress. The pretty young mom, 33, was one of four victims executed in cold blood last Sunday in a Medford, New York pharmacy. The mom of

BIG COVERAGE on notorious Boston gangster James 'Whitey' Bulger. CNN offers the above backgrounder on the man who who Beantown with an iron fist leaving corpses in his wake. Bulger was finally captured last week. ALSO, a terrific column by Peter Gelzinis in the Boston Herald. We've always thought Gelzinis was one of the best city columnists in the country. Check out the prose: 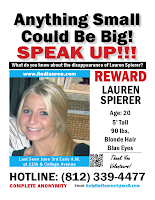 WHERE'S Lauren Spierer? Three weeks after her bizarre disappearance after partying in Bloomington, Indiana no trace has been found of the New York native, 20. A wide variety of rumors have emerged and cops remain tight-lipped. A wide array of rumors have also emerged, including suggestions the pretty blonde OD'd after hammering cocaine all night--she does have a heart condition--and her pals panicked and hid her body. A boyfriend remembers nothing of June 3 where he partied till the week hours with Lauren.
Saturday saw hundreds of volunteers scour rural areas around the university town. It is not known if anything was found that brought detectives closer to finding the fashion marketing student.