STRIPPER felon Lee Grace Dougherty called her fiance from jail and told him: "Honey, your girlfriend really screwed up.
Speaking out for the first time Brendon Bookman said that she had admitted making mistakes in her crazy cross state crime spree with her brothers Ryan Dougherty, 21, and Dylan Dougherty Stanley, 26.
He told Good Morning America that during a phone call from jail she told him: "Honey, your girlfriend really screwed up. "
He added: "Considering what she has allegedly gone through, was lucid and coherent and sounded pretty normal. She was just saying I will never know how bad it hurts to be shot with a 40 calibre bullet."

THEY were found lying in a huge pool of their own blood, wife and her baby daughter viciously stabbed to death, their husband and father barely alive nearby.
But when cops asked Seattle doctor Louis Chao Chen, 39, who had committed the brutal crime, his answer shocked them.
"I did," he said, according to court documents.
A naked Chen was discovered by a co-worker at the city's Virginia Mason Hospital who'd gone round after staff had become concerned when he hadn't shown up for an orientation session.
After they called 911, police rushed to the apartment at 910 8th Avenue, where they found the doctor's 29-year-old partner and their adopted 2-year-old son stabbed to death.

A MEGA-CHURCH Pastor found dead in a Times Square hotel room was found with an envelope of white powder in his pocket, cops say.
Multimillionaire Zachery Tims's death remains a mystery after the autopsy proved inconclusive, so cops will now test the substance to see if it sheds any light on his mysterious death.
The founder of the New Destiny Christian Center, which boasted of a membership of more than 8,000 people, claimed on his website that he'd overcome a drug addiction and became a pastor because "God had a greater plan."
But now it appears he may have been tempted again, during his stay at the luxurious W hotel.
It wouldn't be the first time he had fallen into temptation.
In his memoir, "It's Never Too Late," he writes that he was convicted of attempted murder at age 14 and spent two years in juvenile facilities.
Read more »
Posted by Crime Scene USA at 6:12 AM No comments:

THAT'S So Raven star Orlando Brown had been busted for drunk driving, with his pregnant girlfriend in the car according to cops.
The 23-year-old actor/rapper was driving through Hollywood late Friday when cops stopped his car in front of his home because he did not have a license plate.
Then when they opened up his car they smelled booze so they immediately gave him a filed sobriety test, which he flunked, according to TMZ.
A source close to the star revealed: "Orlando was as shocked as anyone that he failed the test. Although they had been out, he'd only had a few drinks.

A DEADLY daddy has admitted to chopping the head off his disabled seven-year-old son with a meat cleaver and leaving it outside his home so the child's mother would see it.
Jeremiah Lee Wright told cops "that he'd gotten to the point where he was tired of taking care" of his son Jori Lirette, who had cerebral palsy and heart problems, needed a feeding tube and was in a wheelchair.
So he grabbed the butcher's knife and cut up his boy over the kitchen sink at their Thibodaux, LA home  before dumping his head outside for his girlfriend Jesslyn Lirette to find.

Read more »
Posted by Crime Scene USA at 5:12 AM No comments:

A TWISTED TENNESSEE music teacher was marching to his own tune. Now, Daniel Torroll is going to have to face the music after he was caught performing a sex act on a doll within view of an elementary school. The 56-year-old was found naked under a bridge on school property in Spring Hill. His mambo partner was a child-like doll that had, er, holes cut into it for what purpose, we can only imagine. The erectiled educator confessed to hormone-charged

FOR DECADES, the sickening sex slaying of pretty Ohio schoolgirl Eileen Adams was unsolved. Now, the first-degree murder trial of her suspected killer got underway Monday in Toledo. Eileen, 14, was found dead six weeks later in a frozen field in 1967, her body hogtied and a nail pounded into the back of her head. Robert Bowman, 75, was arrested and is now on trial. His ex-wife Margaret testified to finding the girl. MORE FROM OUR NEW SISTER SITE, COLD CASE USA

Posted by Crime Scene USA at 12:29 AM No comments: 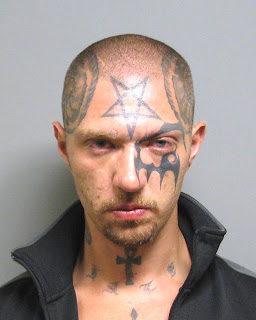 OH, he had so much promise. Chess club. Debating Society. Prom queen. Offers from Harvard and Yale. Now look at him. Things could have turned out much differently...
Posted by Crime Scene USA at 12:10 AM No comments: