OH DEAR. It's not looking very good for Party Mom Casey Anthony on trial for her life in Florida for the heinous first-degree murder of her toddler daughter Caylee Anthony. Seems everyone could smell decomposing flesh in her car. Today's highlights are above. Or... CNN ON CASEY ANTHONY
Posted by Crime Scene USA at 8:37 PM No comments:

SHOT WITH CROSSBOW AFTER AR-ROW OVER PHONE

TALK about an overreaction.
A crazy daughter shot her father in the stomach with a crossbow after he took away her cellphone.
Tony Iovinelli was trying to discipline his tempestuous 15-year-old when she blasted him with the bolt, which could quite easily have killed him.
Then she took the phone back and refused refused to let her wounded father use the phone, forcing him to crawl to a neighbor's home in Tahuya, WA, Mason County sheriff's spokesman William Adam said.
Neighbor Dave Blackwood said: "It went straight sideways. It was parallel to his arm, right into his body."

A SELF described "momma's boy" butchered his own mother, stabbing her more than 40 times in the chest, then turned the blade on a hooker he paid for with her credit card. Mad Gary Schuning "viciously and senselessly" slashed and stabbed 40-year-old Doris Pagliaro after night of heavy drinking and drug taking. Her body was found in a first-floor bedroom of their Chicago home with a knife still embedded in her chest.
Then he took her credit card and called 18-escort services, eventually bringing three different women to his house, before calling in 21-year-old Kristi Hoenig in for three-way sex and promising her  $1220.
But after she arrived she became alarmed at the spattered blood around the house and called her pimp - who called the cops when her call ended abruptly, prosecutors said. 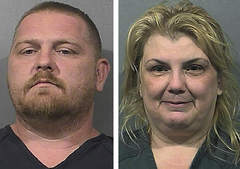 CHRISTIAN CHOATE'S mother has finally arrived. A little too late, mind you, but she's now in the picture. Court documents filed by Aimee Estrada reveal she is asking for custody of Christian's sister Christina. Her ex-husband and Christina's father, Riley 'Redneck' Choate and his wife Kimberly Kubina-Choate have been charged with first-degree murder in the horrific torture death of Christian, 13, in Gary, Indiana. It was Christina who blew the whistle on the evil couple and she now fears that her wicked stepmother "has put out a contract on her."

OLYMPIC figure skater Nancy Kerrigan's brother was sentenced to the maximum two-and-a-half year jail term for the assault that led to the death of their 70-year-old father.
Mark Kerrigan put his hands around Daniel Kerrigan's neck with such force that he broke cartilage in his father's larynx and triggered his heart failure after the pair fought in their Woburn, MA home.
He was acquitted of manslaughter but convicted of assault in his father's 2010 death. Tearfully, Nancy Kerrigan pleaded with the judge not to send him to jail, telling the him that her large family supported

HE really needs some lessons in childcare.
Jonathan Weaver really wanted to watch the basketball game, but he was also supposed to be looking after his girlfriend's children, while she went to night school. So what did he do?
Well he got out some tape, bound, gagged and hooded the toddlers aged one and two and left them in the car seat in the garage of their Las Vegas apartment.Cops were called after a passerby heard the terrified children crying and after firefighters cut open the garage door they found the two toddlers in car seats, their hands bound with a white rope or twine that also wrapped around their necks.
A piece of clothing was stuffed in both boys' mouths and a shirt was pulled over the younger child’s face, police told the Las Vegas Sun. 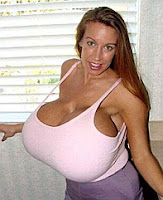 HER employer claims she is there with the breast of intentions, while her opponent claims she's making a boob of the proceedings.
Chicago attorney Thomas Gooch claims the woman's sole purpose "is to draw the attention of the jury away from the relevant proceedings" - a big time case over a used car. So he asked  Cook County Circuit Judge Anita Rivkin-Carothers to order the woman to sit in the gallery with other spectators. "Personally, I like large breasts," he said.
"However, I object to somebody I don't think is a qualified paralegal sitting at the counsel table - when there's already two lawyers there - dressed in such a fashion as to call attention to herself."

Read more »
Posted by Crime Scene USA at 4:38 AM No comments:

FBI agents have swooped on on a 91-year-old grandma who they say has been selling mail order DIY suicide kits from her home. Sharlotte Hydorn dubbed "Granny Suicide" is the founder and owner of The GLADD Group, or Good Life And Dignified Death which sells a product that consists of a plastic hood that closes around the neck. It also includes tubing that connects the hood to a tank of helium or other inert gas that users must supply for themselves and clear instructions on how to take your own life.
The grisly granny claims she isn't responsible for who uses the kit and is only trying to help people in pain. She has been in business for three years and said she now sells up to 60 kits a month.

Read more »
Posted by Crime Scene USA at 4:12 AM No comments: 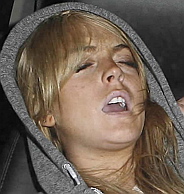 FORMER actress Lindsay Lohan surrendered to authorities yesterday to begin serving time for jewelry theft yesterday.
But thanks to her expensive lawyer and a cushy deal she'll serve her 120 days detained at home rather than going to jail, after pleading no contest to stealing a $2500 necklace from an LA jewelry store.
She was found to be in violation of her probation stemming from a 2007 drunken driving case.
The 24-year-old was booked and fitted for with an electronic monitoring ankle bracelet around 5 a.m, according to a Los Angeles Sheriff's Department news release.
She was later released to begin serving more than a month under house arrest, ending on June 29.

Posted by Crime Scene USA at 3:44 AM No comments: