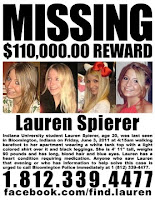 ON JUNE 3, pretty blonde New York co-ed Lauren Spierer, 20, disappeared after a night of heavy partying in Bloomington, Indiana where she attended university. She has not been seen since and numerous searches have turned up little evidence. Her parents have been on the ground since Day 1. Here is her mom Charlene's open letter:
July 21, 2011
Our daughter, Lauren, disappeared on June 3, 2011. In the blink of an eye, she disappeared. I truly hope as a parent, you never get that phone call. The feeling is indescribable. Weeks later, the feeling is the same. It's as if our lives before June 3rd never happened. We are suspended in time. I cannot imagine doing anything other than searching for Lauren until the time we
Read more »
Posted by Crime Scene USA at 10:31 AM No comments:

IN THE USA, there are tens of thousands of unsolved murders, disappearances and killers who've gotten away with it. We want to make a difference. CRIME SCENE USA is pleased to announce that we will soon be launching a brand new blog: Cold Case USA. Cold Case USA will focus on America's unsolved crimes, its missing people and finding its most heinous criminals. Stay tuned!
Posted by Crime Scene USA at 10:22 AM No comments:

THEY BARELY dated for a few weeks but Dmitry 'Crazy Dmitry' Smirnov was having none of it. And 2 1/2 years after the split he then stalked and murdered Jitka Vesel. On Friday, he pleaded guilty to murdering the 36-year-old beauty and now he has been sentenced to life in prison. Smirnov showed no emotion in court, according to the Chicago Sun-Times. He shot Vesel 12 times in a parking lot.
He told the court: “Because you can’t just expect to just dump someone like that and ignore them for two years and...to get away with it with no consequences and, you know, just waste someone’s life like that."
The pair met online and the Canadian man later travelled to Chicago in December 2008 to stay with her for several weeks. Smirnov returned to Canada and the relationship crashed. She cut off all contact.

SUMMER MUGSHOT MADNESS! YOU'RE KIDDIN' ME? 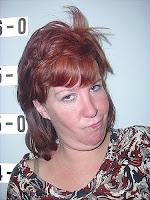 IS THAT a gun in your pocket copper, or are you just happy to see me. OK, this crook isn't buying the whole mugshot thing. And for that, we respect her.
Posted by Crime Scene USA at 9:50 AM No comments:

IN A SPLIT second of madness, five people were shot and killed at a Grande Prairie, Texas roller rink Saturday and the gunman then blew his brains out. Cops say the killer calming pulled out a pistol and started shooting during a birthday party. It was a domestic disturbance that spiraled out of control.
Police Chief Steven Dye said: "We are still working on identifying the victims, and we are still working on notifying the families."
MORE IN THE STAR-TELEGRAM

Posted by Crime Scene USA at 9:47 AM No comments: