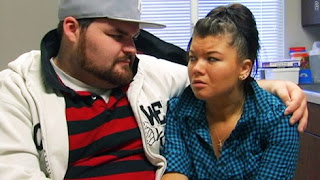 "TEEN MOM" headcase Amber Portwood is shooting down an offer from the DA that would have kept her out of jail on a slew of charges. The 20-year-old Anderson, Indiana knucklehead was investigated on child neglect and felony domestic battery after a September episode of the moronic MTV reality program showed her slapping, choking and kicking the father of her baby, Gary Shirle, 24..
Portwood, dressed to the nines, attended a Madison County court
hearing last week. She told The Herald Bulletin she wouldn't be able to do her job as a mother if she took the plea deal of 90 days on house arrest and two years of probation.
The judge gave Portwood and her attorney 60 days to work out a new plea deal or go to trial.
Officials say dozens of viewers called the state's child abuse hotline to report Portwood's outbursts.
Amber--destined for a future in porn--sniffed at the offer: "Are you kidding me?"
Posted by Crime Scene USA at 9:04 AM