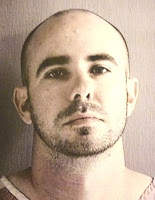 LOUISIANA firefighters are reeling after one of their own was murdered in a bizarre car sale gone awry. Cops say fire battalion chief David Smith, 43, was discovered murdered and wrapped in plastic in the trunk of a Camaro and shot four times. It all started when a neighbor of Smith's in St. Tammany Parish heard gunshots and called cops. A man named Michael Lizana, 33, answered the door and said he was Smith's roommate.
Sheriff Jack Strain said: "The deputy, given no evidence to think otherwise, left the scene, felt he needed to stay close to listen to additional gunfire or any potential evidence that may came forward."
But the deputy ran into one of Smith's fellow firefighters nearby and, after talking to him, became suspicious. Cops now believe Lizana came to the
house with the intention of buying Smith's Camaro, which was up for sale.
Strain added: "Somehow that morphed into this incredibly terrible crime and left David Smith, at a young age, and full of life and a public servant -- dead."
MORE ON FIREFIGHTER MURDER
Posted by Crime Scene USA at 9:31 AM