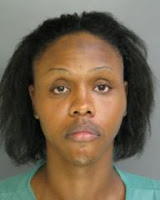 A HYSTERICAL transsexual pleaded guilty to fatally shanking her boyfriend during an argument in suburban Philadelphia. Asia Santana, 40, who once upon a time was Tyrone Crawley, admitted to third-degree murder in the grisly knife slaying of Eric Nevith, 28, who was stabbed six times with a kitchen knife Aug. 13 in what cops called a "rage killing."
Death was due to wounds that pierced the thoracic aorta and a lung, the prosecution said.The murder happened at Santana's cousin's home, where the doomed duet were staying. They had been together for about six years with numerous "ups and downs."
"It's a very sad case. There is no happy ending in this case," the DA said.


Santana, played the femme fatale in court, dressed in a cream satin blouse and black pants. She prefers to be called Asia Santana. She could face 20 to 45 years in the big house.
"It’s a very sad and tragic situation. Our client is very sad. She loved this person and she is really traumatized by this event and cries regularly," said defense lawyer Patricia Cassidy.
Posted by Crime Scene USA at 10:08 AM