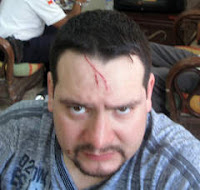 APPARENTLY, the Real Housewives of New Jersey are shitty in real life too. Oh, you think reality TV is real. Sorry. Anyway, a Chicago man claims he was attacked by members of the Real Housewives of New Jersey cast after an incident at a club in the Dominican Republic. Adolfo Arreola, a Chicago cop, tells the CHICAGO SUN TIMES that he and his wife were
enjoying a dance when his mother-in-law got a faceful of champagne from one of the Housewives hotheads.


He said: “I went over and said ‘Hey what’s happening here?’ and I was surrounded. Albie says to me ‘What the F---?’ And they knocked me down, started punching and stomped on my face."
At the time, the cop didn't know who attacked him but later discovered it was: Joe Giudice, Albert “Albie” Manzo and his brother Christopher Manzo (regulars on the moronic show.) His cousin suffered a broken leg in the melee. Now, the two men have filed suit against Giudice and the Manzos along with the Bravo network that peddles the idiot fest. The hotel and Hard Rock Cafe have also been sued.
The “Real Housewives” were on the island to film Season 3 — airing now — of the show that chronicles the spending habits and shouting matches of Garden State housewives.
It was Teresa Giudice had sprayed Arreola’s mother-in-law in the face with the champers, Arreola says. The hotel has denied the charges.
Posted by Crime Scene USA at 9:14 AM