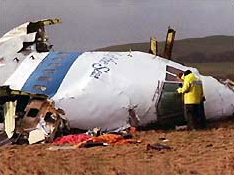 TWO-YEARS after he was given just three-months to live, the Lockerbie bomber has been filmed at a Lybian televised rally.
Abdelbaset al-Megrahi, 59, was released on "compassionate grounds" from a Scottish prison where he'd been serving a sentence for blowing up  Pan Am Flight 103 in 1988, killing all 259 passengers and crew on board the New York-bound Boeing 747, and 11 people in Lockerbie.
But from the moment he touched down on Lybian soil, the convicted terrorist, who had originally been sentenced to 27-years for the brutal attack, he was hailed as a hero, after serving just seven.  Now, although he appeared frail and in a wheelchair, his appearance on TV has sparked "outrage" amongst the victim's families.
American Susan Cohen, whose 20-year-old daughter Theodora was killed in the atrocity said: "This is no surprise, it was inevitable. It was obvious at the time that the man wasn’t anywhere near death.
"But still, hearing about this, I feel anger and outrage. Sending him home was a disastrous policy."
The TV appearance comes just two weeks after dramatic plans to snatch the convicted  terrorist from his luxurious Tripoli villa and force him to face justice in America, were revealed.
The mission would involve  Megrahi being detained by opposition troops and then handed over to U.S. special forces.
President Obama has reportedly told the Libyan rebels, through intermediaries, that handing over Megrahi is a condition of his  support for their battle against Gaddafi.
Megrahi is understood to be no longer undergoing chemotherapy, instead receiving round-the-clock care at his luxury villa in Tripoli.