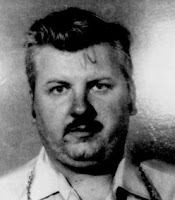 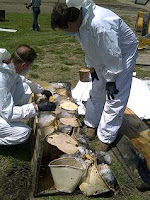 THEY were the eight without names and for 30 years their identities have been a mystery. Now, cops are hoping that DNA may put names to the eight unnamed victims of serial killer John Wayne Gacy. Cook County Sheriff Tom Dart has obtained a court order to exhume the bodies--and asking for the public's help. Anyone who believes they may be related to the unidentified victims should call a sheriff’s hotline at (800) 942-1950. DNA tests can confirm whether they’re related.

Dart said: “These were eight young men with futures. These are eight people who deserve
more.”
The victims were among 29 young men whose bodies were found on Gacy’s property in suburban Chicago in 1978 ending his reign of terror driven by his twisted sexual desires. Four more Gacy victims were found in the Des Plaines River. The killer clown told cops he dumped a fifth victim in the river, but that body was never recovered. Gacy was executed in 1994. MORE IN THE CHICAGO SUN-TIMES
Posted by Crime Scene USA at 8:02 AM