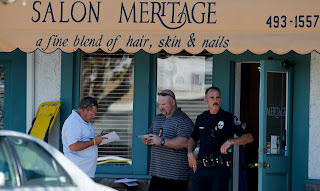 BY THE time the shooting ended at a posh Seal Beach, California hair salon eight people were dead and another critically wounded. Cops say the crazed triggerman who entered Salon Meritage yesterday afternoon is Scott Dekraii, 42, whose estranged wife Michelle worked at the salon and was one of the victims. Seal Beach is south of Los Angeles in Orange County and no one could remember the last time there was a homicide. Apparently the
couple had been in a bitter custody battle, sources said.

Nearby store owner Kimberly Criswell said: "There was like a 'pop pop' ... and my receptionist screamed out, 'He just shot that man' and we all went into the bathroom and called 911. I'm sure I've lost some friends today." MORE ON THE SEAL BEACH MASSACRE
Posted by Crime Scene USA at 7:31 AM