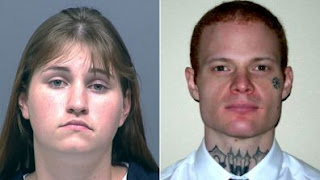 COPS on the West Coast are hunting a twisted Bonnie and Clyde suspected of murdering his stepmother. They are also suspects in the disappearances of his father in Washington state and a teen in Oregon. According to cops, David Joseph Pedersen, 31, and Holly Grigsby, 24, are armed and dangerous although they have no idea what's driven the crime spree.
A surveillance tape shows Grigsby and Pedersen at a Salem, Oregon, convenience store, and cops say the woman  tried to use a stolen credit card. A male was sitting in the car, but it wasn't Cody Myers, 19, the missing teen. Pederson's stepmother, Leslie Pedersen, 69, was found dead Sept. 28 with her hands tied with duct tape and a bloody pillow wrapped around her head. His dad, David Jones Pedersen, is also missing.
Pedersen and Grigsby have lengthy criminal records. Family members said Myers' cellphone quit receiving calls Saturday, and they notified authorities Sunday. Relative Mike Klein said: "We still hold out hope that we're going to find Cody, that a miracle has happened, and we're going to find him alive and well."

MORE FROM FOX ON BONNIE AND CLYDE
Posted by Crime Scene USA at 8:21 AM