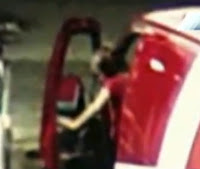 REMEMBER this deadbeat dad who thought it would be a good idea to let his nine-year-old daughter drive because he was drunk and then bragged about it in a gas station.
Well his so called "designated driver" was forced to testify against her idiot parent Shaun yes that is an M Weimer.
She told the court that her dad had drunk half a bottle of whiskey and had thrown the rest away when in the wee hours of October 8, he asked her if she wanted to drive.   "I said yeah but I'd be a little scared," she told the court.
"Was your dad drunk?" assistant prosecutor Keisha Glenn asked.
"He told me he was," the girl replied.
After the tearful girl was walked off the stand the judge watched a portion of the surveillance video from the gas station in which Weimer was heard to brag: "We're leaving and she's driving. I'm drunk."
Charles Girardot, a customer at the gas station, decided to call 911 and follow the van.
He said the girl never swerved, stayed in her lane and even used turn signals before a police officer stopped her.
"She's driving pretty good. I can't believe it," Girardot told a 911 dispatcher.
To send Weimer to trial, the prosecutor must persuade the judge that his actions were likely to cause death or serious injury to his daughter.
Defense attorney David Steingold however claimed: "This young girl was very proficient" at driving small ATVs and mini motorcycles."
The trial continues.