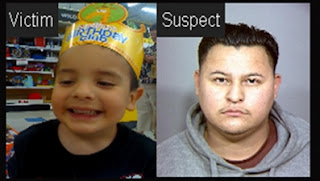 A CALIFORNIA CANAL has given up the body of a small child feared kidnapped by his mother's ex-boyfriend. Stanislaus County Sheriff Adam Christianson said the body was found Tuesday morning from the Mendota Canal and detectives fear it is four-year-old  Juliani Cardenas.

The little boy was kidnapped from his home in Patterson, California--about 30 miles away.
"We have recovered the body of a small child whose physical description and clothing description matches our kidnapping victim," a mournful Christianson told reporters. "This is a very difficult time for everybody in the community."
The suspect in the kidnapping is Jose Rodriguez--the ex-boyfriend of Juliani's mom. His silver 2003 Toyota Corolla was pulled from the canal on the weekend. There was no sign of the suspected killer.
Tabitha Cardenas--Juliani's mom--is eight months pregnant with the suspected killer's daughter. She ditched him several months ago.
MORE ON THE TRAGEDY
Posted by Crime Scene USA at 10:47 AM