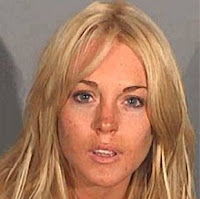 UPDATE! KNEW IT. KNEW IT. Lindsay Lohan has slammed accusations she nicked a $2,500 necklace (not $5,000 as originally reported) as "bullshit." One of her, like, stupid assistants just forgot to return the bauble. MORE FROM TMZ
TROUBLED STARLET Lindsay Lohan could be in trouble with cops--again. According to the Los Angeles Times the former actress is under investigation by the LAPD in connection with a theft of a $5,000 necklace from a jewelry store.
Cops say, LiLo was seen in a store video wearing the necklace--which then disappeared. After detectives began investigating and preparing a search warrant, a Lohan hanger-on brought the necklace to a nearby precinct. Hmmmmmm.

Formerly hard-partying Lohan is also under investigation for assaulting an employee of the Betty Ford Clinic where she was longtime guest. It was her fifth time in rehab.

Now living across the street from one time lesbian lover, rich kid DJ Sam Ronson, Lohan is desperately hoping to restart her career.
Posted by Crime Scene USA at 10:05 AM