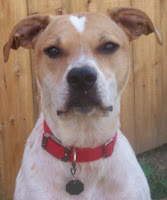 HE certainly wasn't this mans best friend - because this dog helped bust his owner for carrying pot.
Sherman County Sheriff John Terrel didn't need any help from a sniffer dog when he pulled over a pick up truck, because the pit bull had already tossed the stash that the driver was carrying.
When he picked up the sock which he'd seen fly out of the window, it was stuffed with marijuana and hashish.
Much to his amazement the 32-year-old driver then told the officer that he was trying to hide the sock when the dog grabbed it and wouldn't let go.
After a tug-of-war the dog won, flipping the drugs out for the officer to find.
Sheriff Terrel said: "I wish everyone traveled with their own personal drug dog."
The man will now face charges of possession.
Posted by Crime Scene USA at 6:34 AM