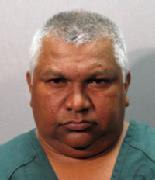 AMERICAN IDOL brings out strong feelings in people. People Barran Prakash, 47, of Brooklyn. He really wanted to watch 'American Idol' but two co-workers he was sharing a Jacksonville, Fla. hotel room with did not. So Barran pulled a knife when they refused to change the channel and held the duo hostage.
Barran was on the phone with his wife who enthused about the show's latest offerings. He wanted to watch the 'talent' contest too. They argued. It got nasty and he pulled a knife. Cops were called. Barran had even held a knife to one man's throat so great was his lust for American Idol.
Prakash is charged with aggravated assault with a deadly weapon without intent to kill. He was being held in the Duval County Jail.Ironically,
"American Idol" was not on TV on Tuesday night.
Posted by Crime Scene USA at 6:26 AM