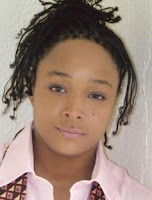 THE Actress who played a gun toting, drug dealing hit woman in TV smash The Wire has been busted in a Baltimore drug raid.
Felicia Pearson, who played popular character Snoop - a cold blooded killer - for a on the HBO series was picked up in a massive sweep of the city by cops and Drug Enforcement Administration agents.
Cops confirmed she had been one of those picked up but declined to say what charges she faces.
The troubled star, now 30 gave one of the more memorable supporting performances in "The Wire," portraying an androgynous, husky-voiced young assassin who went about her business completely cold blooded.
Set in Baltimore, the Emmy-nominated series dramatized the decay of an inner city from the point of view of drug dealers, police who pursued them, as well as politicians, teachers, and even reporters.
But now she faces a punishment similar to many of the characters on the show - lengthy jail time if convicted.