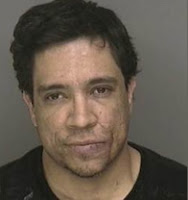 IT REALLY wasn't the send off they were expecting.
They thought they were going to watch a touching video tribute to their elderly deceased friend but instead they were greeted with horrific child pornography images. Josue Rivera, 38, who illustrates for DC Comics and has done covers for comics, including "The Creeper: Welcome to Creepsville," several "Dr. Fate" issues, and more was immediately picked up.
The arrest came almost 10 months after an employee of Luz de Paz Funeral Home reviewed the drive, saw it was no memorial tribute and called Bridgeport police, the Connecticut Post reports.
Police seized Rivera’s home computer and found as many as 153 files
they believe are child pornography depicting 35 children, including three videos, the Post reports.
His wife is trying to get a restraining order, the Post reports, and she was upset that a judge refused to issue one.
Posted by Crime Scene USA at 9:43 AM