THIS is the grisly map of the Long Island beach where the murdered bodies of 10 people have been found in the past few months. 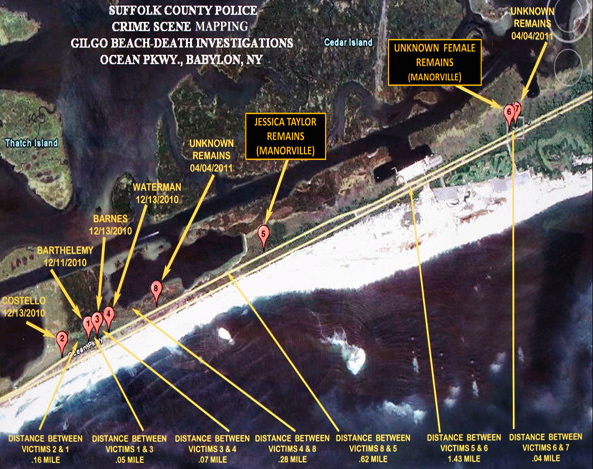 The first four sets of remains were all hookers who advertised on Craigslist leading some to dub the killer, the "Craigslist Ripper."

They are identified on the map as numbers 1 through 4. Each of the women, Amber Lynn Costello, Melissa Barthelemy, Maureen Brainard-Barnes and Megan Waterman were found in close proximity to one another in December last year.
Another, Jessica Taylor and another woman who has not been identified yet were found dismembered with their heads, hands and feet found in the remote coastal area, while their torsos were found about 30 miles away in Manorville, New York.
They are numbers 5 and 6 on the map.
Cops now believe that they were killed by someone else as the way they were disposed of was very different to the others.
The remains of a female infant found wrapped in a blanket and an Asian male who endured trauma, may have been the victims of two separate killers as well, since their remains were found almost two miles apart.
They are numbers 7 and 8 on the evidence map.

All the bodies were found thanks to the search for Shannan Gilbert, who vanished last May after visiting a “client” on Long Island whom she connected with using Craigslist.
She was last seen by her driver allegedly acting delirious when she refused to leave the client’s home and ran off in an unknown direction.
She was not among the remains found and police continue to search for her.
Posted by Crime Scene USA at 8:52 PM