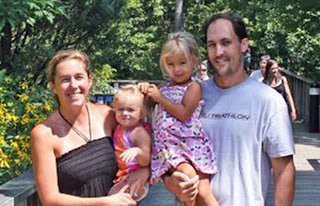 A TECHIE love rat has been convicted of murdering his wife and has been sentenced to life in prison. Brad Cooper--originally from Calgary, Canada--strangled his wife inside their suburban Raleigh, North Carolina home in July 2008. He was found guilty of first-degree murder in the high-profile trial that was rife with sex, infidelity and money.
Judge Paul Gessner said: "Your verdict in this case speaks the everlasting truth. This case is a horrible, sad tragedy . . . I suspect this matter will weigh heavily upon you in the days to come."
Nancy Cooper--the mother of his two children--was
found naked and strangled to death in a drainage ditch about 3 miles from her home. Hubby said he had gone out jogging but soon the spotlight was on him.  But as detectives dug deeper they discovered that the couple had both been involved in sexual affairs with other people.

Brad Cooper has maintained his innocence since he was arrested.