TINA ANDERSON: SORRY TO CHURCH FOR BEING RAPED 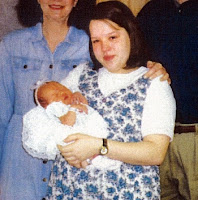 IT HAS been a blong time coming but Tina Anderson may finally get justice. You remember her? She claims she was raped and impregnated when she was 15-years-old by a member of her church. Church members were furious, right? Well sort of. They were angry with her and she was made to read a letter of apology to the congregation of Trinity Baptist Church in Concord, New Hampshire.
Church elder Ernest Willis, now 52, has confessed to having sex with Anderson but says it was consensual. But cops believe her and say he raped her twice in her home in 1997.
Church leaders made her apologize and sent away to Colorado by Pastor Charles Phelps to foil a police probe. She gave birth in Colorado
and put the baby up for adoption. A local detective reignited the case last year. Anderson, now 29, is married and has three children in Arizona.
She asked to be ID'd publicly to draw attention to her case. She said: "It needs to be done."
MORE IN THE CONCORD MONITOR
Posted by Crime Scene USA at 12:56 PM