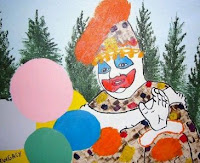 YUCK. PUKE. A John Wayne Gacy original on your wall? What a great way to ruin your day. A Las Vegas (where else) art collector's nutty scheme of a planned charity sale of notorious serial killer Gacy's paintings has run into fire from the victim's group that was supposed to benefit. Now, the National Center for Victim's of Crime wants its name off the exhibit.
Arts Factory owner Westly Myles said he hoped to coordinate the show because he felt, and here it comes, that the paintings would "provoke discussion."


He said: "People can think what they like, I see it as an opportunity to help from something that was bad." Okay, well Myles we certainly have our thoughts, you provocative devil. Gacy--for anyone who doesn't know--was convicted of raping and killing 33 boys and young men during a six-year reign of terror. He was nabbed in 1978 and given the needle in 1994. After he was executed (hurray!) his lawyer sold the paintings
He was dubbed "the Killer Clown" because he often performed as "Pogo the Clown" at events for children. Creeped out? Yeah, us too.
VICS SAY 'NO' TO GACY ART
Posted by Crime Scene USA at 9:33 AM