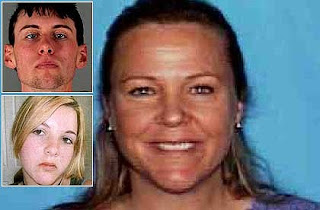 
"I called Boston and told him [Joanne's] finally asleep and he can come over now.
I was up in my room, sitting on my windowsill, and I saw him walk onto the driveway and come in through the back gate. He walked in so he wouldn't have to use gate code so police knew he didn't come in through the gate. I told him not to go in through the gate and park at the school. We waited outside and smoked a couple cigarettes.
I felt really edgy and talked about going to San Francisco -- just talking. He had a knife, he showed it to me when we were standing outside.
He said he got it from his work and put it an inside pocket in his coat. It was wrapped in a rubio's plastic bag.
I finally got up enough nerve to go back inside, open the door and let him inside. I heard a creak, I thought it was my mom, I told him to wait in the bathroom. She was still sound asleep so I went to get him and let him upstairs.
I had another knife from the kitchen set.
He goes in, I'm sitting with my back to one of the doors, waiting, I saw him go in and I turned my back to it.
I didn't hear anything, so I peeked around the door, he was posing, sort of like practicing. He was holding it, practicing. He was about a foot and a half away from the bed.
I was waiting for it to start, the noise to start. My mom woke up. With the knife in my hand I turned to go into the room, I stood up, I was in the doorway, I couldn't do it, I couldn't go inside.
I put my hands over my ears, closed my eyes and hummed. I heard her telling him to stop.
He came out of the room, he was holding the knife and he was just standing there facing the stairs.
I got up, I hugged him and told him everything was going to be okay. I went into my room, got my bag that had clothing and I told him not to touch anything, and before I went back downstairs, I told him to wait so I could close the windows, the blinds and turn on the air conditioning.
He got a blanket and held it up so I couldn't see my mother. [He had] blood on his pantleg, a teardrop by his left eye. He just held on to the knife."
TYLAR WITT MURDER COVERAGE
Posted by Crime Scene USA at 9:54 AM