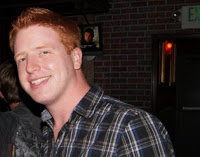 PM UPDATE: Cops in Mexico City have arrested a suspect in the brutal murder of US Air flight attendant and gay rights activist Nick Aaronson, his mom told ABC News. The alleged killer was nabbed due to surveillance video. COPS NAB ALLEGED KILLER
EARLIER: Mexican cops in a remarkable leap of logic believe that a US Airways flight attendant found strangled in his hotel room Saturday MAY HAVE HAVE BEEN MURDERED! Nick Aaronson, 27, of Phoenix was found dead in his Mexico City hotel room, his luggage
strewn everywhere. He was lying naked next to his bed, his hands bound and a belt around his neck. He had been hit several times. However, it didn't appear his room had been broken into, cops said. He had been with the airline five years.

Union rep Deborah Volpe said:  "Tragic, tragic loss. He had a smile that could light up the room 20 minutes before he walked into it,"
FLIGHT ATTENDANT MURDERED
Posted by Crime Scene USA at 7:34 AM