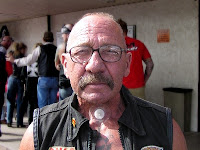 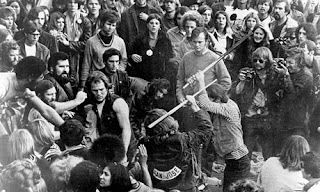 I KNEW Sonny Barger, and you sir, are no Sonny Barger. Are the Hells Angels falling apart? Events over the past year suggest that maybe, yes, they are. Inter club warfare, foolish actions and complete lack of discipline appear to be hurting the notorious motorcycle gang that was founded by fliers after the war. * Three Angels have died violently in
the past month alone. * 26 Angels and associates were recently busted in San Diego.
* Then, two weeks ago an Angel shot and killed another member at a funeral in San Jose for a gang chieftain. Oh, and the final insult? Another Angel was run down and killed in a road rage incident in Oakland. Huh?
One government agent said: "They are the heavyweight champions of the biker gang culture. And every other biker gang wants the belt." WITHER HELLS ANGELS?