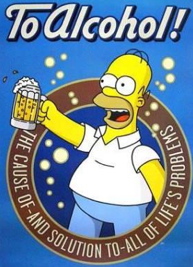 A THIRSTY thief was so desperate for a beer that he burst into two apartments and stabbed a man with a corkscrew during his search for a brew.
Tim Snyder, 36, walked into one Chicago apartment and headed straight for the fridge, but when he didn't find any booze he punched the owner, who had been roused from his sleep by the noisy entrance and left.
Barging his way into the second unit he again struggled with the owner, before stabbing him in the back with a corkscrew the Sun Times reports.
He was then subdued by residents until the cops arrived.

The victim was taken to an area hospital, where he received 22 stitches, but Snyder wasn't done yet, because when cops put him in custody he allegedly spat and threatened officers.
He told one: “I’m gonna kill your ass. You can’t lock me up forever,” according to the police report, before shouting "Want some AIDS?" and spitting at the police officer.
Needless to say they were none too impressed and they charged him with two counts of home invasion, aggravated battery and aggravated battery of a police officer.
Posted by Crime Scene USA at 12:43 PM