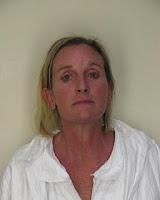 MONSTER MOM Julie Schenecker who is accused of murdering her two teens for giving her lip will soon be divorced, according to her husband.
Col. Parker Schenecker said he was calling it quits in a statement Friday. He met with his wife for the first time since returning to the U.S. He was serving overseas in Qatar on Jan. 27, which is when police said Julie Schenecker shot and killed Calyx, 16, and Beau, 13. The couple talked about--what else--the kids.
Julie Schenecker remains in jail without bond. She has pleaded not guilty, despite the confession investigators said she gave to detectives.
EARLIER FROM CRIME SCENE USA


COL. PARKER SCHENECKER'S FULL STATEMENT: "Today I met with my wife Julie for the first time since I returned from my duty overseas. The meeting was both emotional and productive. We discussed numerous topics but focused mostly on how so many people continue to honor and remember the lives of Calyx and Beau.  I felt it was important and proper to inform her in person about my need to focus on the future, and my intention to file for divorce.  Clearly the events of January 27th have taken Julie and me on different paths. I have said for many days now that I will spend the rest of my life honoring the memory of my two beautiful children Calyx and Beau. This difficult but necessary step will help me to do just that...move forward."