MUGSHOT OF THE MONTH 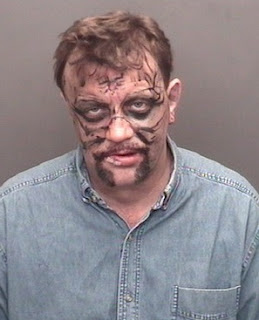 OH DEAR - Meet Ricky Lee Kalichun, Crime Scene USA's first winner of Mugshot of the Month.
Tricky Ricky, as we're some are calling him, thought that his permanent marker mask might stop him from being recognized as he allegedly tried to attack his old room mate with a sword.
Apparently his video games hadn't been returned and he wanted them back.
So donned in camouflage, he blackened his face, sank enough booze to flatten an army and went round to get his games.
Cops told the Evansville Courier Press that the victim used to room with Kalichun and had him come up to the apartment.
Then he allegedly began unplugging a television and stated that a video game console and some games were his.
The occupants then got Kalichun in the hallway, the affidavit said, and he allegedly pulled out the sword and began swinging at the victim.
It's unlikely he'll be gaming for some time, as he's currently being held on a $50,000.
It's not known whether his disguise has washed off yet.