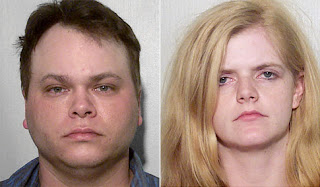 THIS IS as about as sick as you can get. Cops in Virginia discovered a young girl caged and trying to eat herself because she was so malnourished and living in a makeshift cage. Pretty bad. Gets worse. The girl's blond-hair was matted and filled with knots. She wore just a diaper and t-shirt and was eating flakes of dried skin off her body.

The "5 or 6-years-old" girl's parents, Brian and Shannon Gore, were arrested and charged with felony child abuse. Mom was also charged with attempted capital murder.
Now, the twisted twosome are facing first-degree murder charges after the remains of a second child were discovered buried outside their home. Even veteran detectives were sickened by the horrific scene. Said Sheriff's Maj. Darrell Warren: "I've done this for 20 years, and I've never seen anything like this in my life." A baby boy was in good condition.
The shocking discoveries were triggered by a robbery probe with all fingers pointing at the Gores.
Brian's ex-girlfriend said: "He was really a nice guy. He went to church and everything."

MORE FROM THE DAILY PRESS
Posted by Crime Scene USA at 11:24 AM