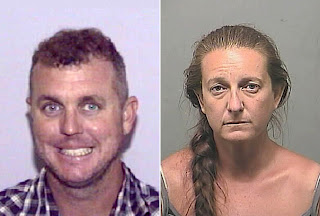 DO NOT screw around with Jennifer Lynn Hearn. Cops in Melbourne, Florida say Jenny murdered her hubby Carl Hearn during a blazing argument--then buried his remains in a shallow grave in the backyard hog pen. As if that isn't enough, Jenny posted on her Facebook page shortly after the killing that poor Carl had skipped off with another woman. She added that she was delighted by the desertion.
She wrote: "Wow. I am so glad one person walked out of my life so others could walk in. I love being single." Her posts also brazenly bragged about
finally finding love with an "amazing" new man who had restored her faith that "there are good men out there" after several stormy years with Carl. She added: "If this is what being on top of the world feels like, I'm staying like this."
But Jenny boasted to one person too many and soon rumors began ripping around Podunkville and it was well known old Carl was abusive. MORE IN THE NY DAILY NEWS