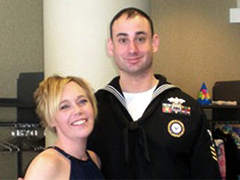 KRISTINE Courtney Gilford was through with her husband Eric Gilford. He had a history of psychological problems and was erratic so she took her 4-year-old daughter and left him. The U.S. Navy recruiter begged her to come back to him. She refused.
Eric Gilford then took a knife and stabbed his pregnant wife 16 times as their little girl--it was her birthday-- watched in horror. Yesterday, Eric Gilford, a shipwreck of a man was sentenced to 100 years in prison for the sickening crime. DuPage (Illinois) County Judge Kathryn Creswell told the sick sailor: “It is impossible to imagine the anguish this young mother felt as she gasped for her last breath as her 4-year-old daughter looked on."
The child was unharmed but her birthdays are tainted til she breathes her last. MORE IN THE CHICAGO SUN-TIMES