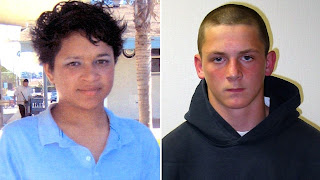 A TEEN who shot and killed his Grade 8 classmate over an escalating gay-straight conflict has pleaded guilty to second-degree murder in exchange for 21 years in jail. The case made headlines across the nation when Brandon McInerney, now 17, was 14 when he shot his classmate Larry King, 15, at their Oxnard, Calif., middle school. An earlier trial ended in a hung jury. While gay rights advocates insisted that the killing was a hate crime, the jury said no.
The case was more a matter of a personality conflict
that escalated to murder. McInerney was described by teachers as a job but very respectful. King was another matter. Born to a crack-addicted mom, he made his way through California's foster home system, was described as emotionally immature and read at a Grade 3 level. Then he began wearing dresses and high heals to school. McInerney didn't like it and witnesses testified King blew kisses at the teen. MORE ON GAY TEEN MURDER
Posted by Crime Scene USA at 7:23 AM