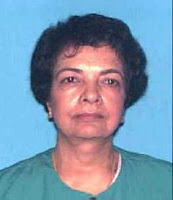 COPS suspect foul play in the bizarre disappearance of an Indiana eye doctor.  Dr. Promila Mehta-Paul, 70, and who always told co-workers and family where she was, left her Highland office last Monday at 5 p.m. and hasn't been seen since. Surveillance footage shows her later driving away from a First Financial Bank where she made a deposit every day. Missing from her home, however, were her 2001 gold Toyota Rav4 and her son’s California license plate. Chillingly, there has been no activity on the doctor’s cell phone or credit cards since she was last seen. Cops sought Mehta-Paul’s children for questioning and initially had trouble locating one of the sons, whom she was living with before she disappeared.
Linda Grayson, an intern for the doctor said: “Nothing out of the ordinary,
like I don't really know her, but from what I gathered from her, she was
always okay. She was pleasant.”
The investigation continues.
MORE ON MISSING DOCTOR
Posted by Crime Scene USA at 6:44 AM