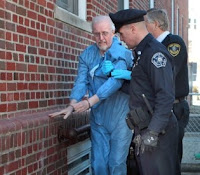 ELAINE McCall got the last word but sometimes actions speak louder than said words. Just ask her husband David. According to cops in Wakefield, Mass. the volatile couple's miserable marriage finally came to an end Monday. The trigger? Elaine told him she would no longer cook or clean.
As the couple--Elaine is 69 and Dave is 72--fought yet again, something snapped in Dav and he got out his Glock and fired it at her. He missed. She laughed.
"You can't even shoot," she chuckled at Dave. On the second shot, he didn't miss and her body fell to the floor. He then tried to kill himself
but missed again, only grazing his chest.


"The Glock is on the floor,” he told cops when they arrived, according to the report. “I shot my wife."Apparently his intention was a murder-suicide but he didn't do so well ion the suicide part. He's been arraigned on first-degree murder charges. Neighbors said they were "quiet."
MORE IN THE BOSTON HERALD
Posted by Crime Scene USA at 8:46 AM