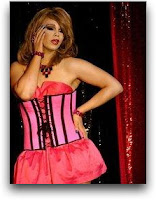 LIFE can be a drag for a queen. Particularly when you're pinched for human trafficking. Police have arrested a popular Atlanta drag queen for his role in trafficking of a minor for sex, sexual expolitation oif a child, pandering by compulsion etc. etc. Seems Pasha Nicole--real name Christopher Thomas Lynch--and his roommate, male stripper Steven Donald Lemery, 35, (charged with similar offences plus child molestation and a litany of other nasty child sex charges) were involved in some pretty foul stuff.


"Most of the victims were runaways or easy targets," a law enforcement official told the Atlanta Journal-Constitution, adding that the suspects used social networking sites to lure their victims. "They would put the kids in a dependent situation. If they wanted to leave, they'd have to perform sexual favors."

Victims came from Georgia, Alabama and South Carolina. Several other people lived at the suspects' home, including three minor children, but they apparently were not abused by either Lemery or Lynch. Lynch and Lemeryare being held without bond in the Douglas County Jail.
Posted by Crime Scene USA at 8:35 AM