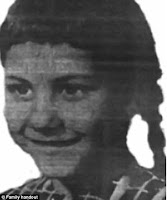 IT’S A CASE that has been ice cold 50 years but a few lucky breaks could mean Santa Barbara cops can finally see light at the end of the tunnel. The search for Ramona Price began half-a-century ago with little progress up until now. Four teams of specially-trained sniffer dogs have identified what cops are calling an ‘area of interest’ near an overpass at U.S. 101 in Goleta.
The bridge, which is set to be torn down, makes this an ideal time to search, according to authorities. Cops now believe that the 7-year-old, who disappeared Sept. 2, 1961, was likely a victim of notorious child serial killer
Mack Ray Edwards.
Edwards, who hanged himself on death row at San Quentin in 1972, was convicted of killing three children – and confessed to the killings of three others (but due to a lack of evidence was never officially charged.) Edwards worked as a heavy equipment operator near the area that dogs have identified.
"When he was in San Quentin he told other inmates he had victims no one would ever find," said Santa Barbara Police Chief Cam Sanchez. "He said no one would ever tear up the freeways."
Sicko was wrong. Edwards claimed to have murdered as many as 20 but in an act of cowardice fitting a child killer, hung himself with a TV cord in his San Quentin cell. A Pasadena writer, Weston DeWalt,, discovered that Edwards worked on the bridge and immediately informed authorities.
That break came four years ago; cops hadn’t made the connection between Edwards and Prices’s disappearance.
Now, with the destruction of the bridge, cops are within touching distance of putting the seal on the case, and allowing Price’s 60-year-old sister, who doesn’t wish to be named, to finally mourn her sister.
MORE IN THE LOS ANGELES TIMES
Posted by Crime Scene USA at 1:00 AM