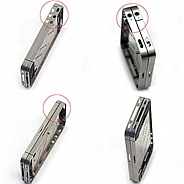 FURIOUS Apple bosses have launched a frantic search after a member of staff left the prototype IPhone 5 in a bar.
It's not the first time that something like this has happened.
Back in 2010 another idiot left a development model in a drinking establishment giving away information, which some experts called 'invaluable' if their rival companies had gotten hold of it.
Although they would have wanted to keep the news quiet, CNET is reporting that the secret was inadvertently revealed by the San Francisco Police, who were tight lipped about what had gone missing but put out a press release called 'iphone5.doc.'

Apple declined to comment on the matter, but it's thought the phone which is due to be released soon

went missing at San Francisco tequila bar Cava22 in July.
The company is however believed to be taking the matter very seriously as SF Weekly reported that police had come to his house to search for it.
Cops said: "The two Apple (security) employees met with the resident and then went into the house to look for the lost item. The Apple employees did not find the lost item and left the house."
Cava22 owner Jose Valle has said that neither the SFPD or Apple have contacted him, although he does remember getting calls about a lost iPhone last month.It follows a very similar incident in April 2010 when a then-unreleased iPhone 4 was left in a the beer garden of a German bar in California by an Apple engineer.
That phone was sold over the internet to the technology blog Gizmodo, which paid $3,000 in cash.
In that instance two men were later charged with theft for selling the iPhone 4, though the then-editor Jason Chen escaped without charges.