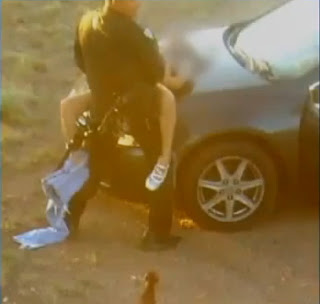 This is New Mexico State Police Officer Bert Lopez, who was fired after he was caught having sex with a woman on the hood of a car.

The eight year veteran was caught by a motion triggered security camera positioned at the  front gate of La Bajada Ranch south of Santa Fe.
A couple of photos were then forwarded to Santa Fe Sheriff Robert Garcia, who identified the officer as being with New Mexico State Police.
He forwarded the images to State Police Chief Robert Shilling and Lopez was put on paid administrative leave for about three weeks and then dismissed.
He has 30 days to appeal.

Spokesman Sgt. Tim Johnson told the Santa Fe New Mexican: "It is an embarrassing situation for the department, but we have to remember the rights of the employee afford him due process we must follow so we won't be commenting further."
The department refused to release the identity of the woman or details about her relationship with the officer.
She has yet to comment, so it's unclear whether the long arm of the law matches any other appendages.
Posted by Crime Scene USA at 9:22 AM