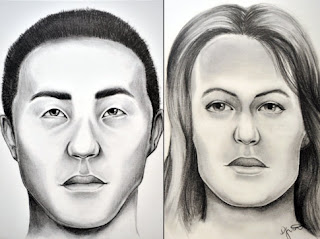 IN THE GRISLY Long Island dumping ground of Gilgo Beach where a serial killer has made it his victims' final resting place, there is an air of fear. Now, cops seem to be closing in on the mysterious maniac (or two) who have been killing sex workers.

Previously it was believed the victims were all women--about 10 in total--now it police say that one of the casualties was a man wearing women's clothing. Cops are theorizing that the Asian male may have been a male prostitute. At least five of the victims were listed as craigslist hookers. Suffolk Count Police yesterday released composites of the unknown victims--the male and Jane Doe No. 6. The Asian man, estimated to be between the ages of 17-23, stood approximately 5'6"and was missing two molars. He has been dead between 5 and 10 years. The woman's torso was found in Manorville in Nov. 2010. It was linked in April to to a head, hands and a foot recovered along Ocean Parkway. The woman, who is white was 5'2" and between the ages of 18-35.
Cops also revealed that the body of a baby girl between 18 and 24 months old was found near the remains of Jane Doe No. 6--was linked to another victim found 7 miles away.
The cops said: "This is not a television show where everything is solved in an hour. This takes painstaking hours of detective work, forensic work. We are doing that as we speak." MORE IN THE NY DAILY NEWS