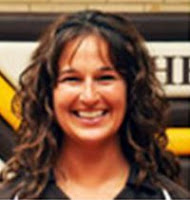 NO ONE could party like Ms. Schuler! Popular (we mean, REALLY popular) former gym teacher teacher Stacy Schuler, 33, is on trial for having sex with multiple students including a wild gang bang with the football team in her Springboro, Ohio home. Testimony has been steamy with witnesses saying the teacher was plotting her insanity defence from the moment rumors of her hijinks began swirling.
A taste of the action: "They were making out and she pressed her body up against mine, and my back was towards the back of the wall and then
we started having sex." Or, even better: "Three young men took the stand Tuesday before the state rested its case. Their stories were nearly identical, all of them testifying to having group sex in Schuler’s Springboro home in the fall of 2010.
One of her accusers said he passed up an opportunity to have sex with Schuler a second time in one night. “Honestly, I was a bit grossed out about us all having sex with her and how easily it came,” he said. “It just didn’t feel right.”
FUN-LOVING MS. SCHULER
Posted by Crime Scene USA at 8:52 AM