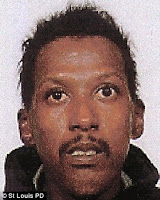 THEIR top teams have tried to crack the code, but the key to the murder has eluded them, so the FBI is asking for your help to solve the mystery.
The puzzle begins in a St Louis, MO filed on June 30, 1999 when the body of Ricky McCormick was found dead.
Inside the 41-year-olds pants, two notes encrypted with a code, a riddle that even their top code crackers have been unable to figure out what they mean.
Dan Olson, the chief of the FBI's Cryptanalysis and Racketeering Records
Unit said: "We are really good at what we do, but we could use some help with this one."
"Breaking this code could reveal the victim's whereabouts before his death and could lead to the solution of a homicide. Not every cipher we get arrives at our door under those circumstances."
He added: “Even if we found out that he was writing a grocery list or a love letter, we would still want to see how the code is solved. This is a cipher system we know nothing about."
Larger versions of the notes can be seen here.
Members of McCormick's family said he'd been using the coded notes since he was a boy but it's not known whether anyone apart from him could translate his secret language.
Investigators believe the notes, which contain more than 30 lines, were written up to three days before his death.
If you have an idea how to break the code, or you have seen similar codes, contact the FBI:
FBI Laboratory
Cryptanalysis and Racketeering Records Unit
2501 Investigation Parkway
Quantico, VA 22135
Attn: Ricky McCormick Case
Posted by Crime Scene USA at 4:51 AM