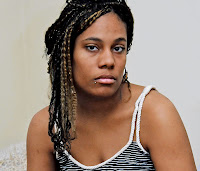 UPDATE: The woman enjoying a sexual romp with a New York man while his grandmother lay dead in the closet said she was terrified. Nakeema Craig was lying in Cora Davis' bed half naked with her grandson Larry Davis, 21, when his uncle arrived demanding to know where the old woman was.
"I was basically in the wrong place at the wrong time," Craig told the Daily News. "It's real scary for me - I can't believe I was laid up in the house the whole time with a dead body."

MORE IN THE DAILY NEWS
WHERE'S GRANNY? Relatives of a 76-year-old New York grandmother where asking that question when they walked in on her
grandson having sex with a woman in the old lady's bed.
According to cops, the relatives discovered Larry Davis, 21, going at it with a 20-year-old working girl when they asked where Cora Davis was.
"Where's Mama? Where's Mama?" a relative asked Larry Davis, according to the New York Daily News.
One of the suspicious relatives threatened to call cops, and Davis split while his paramour stayed behind. When cops arrived they found Cora Davis' corpse stuffed into a
bedroom closet under a pile of clothes. Indications are she was strangled.

"It's just a horrible thing because she was a lovely lady," close friend Dorothea Sadler told the News."She didn't bother anybody."

MORE ON HARLEM HORROR
Posted by Crime Scene USA at 9:10 AM