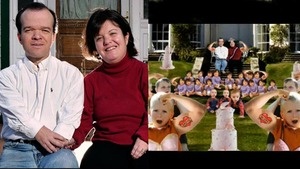 THE LONG and short of it is they're furious and now a dwarf couple from Philadelphia are crying photoshopped! Cara and Gibson Reynolds flipped when an insulting image of them appeared on a reality TV spoof. The Reynolds--both born as achondroplastic dwarfs-- were up in arms after discovering that an earlier photo of them had been twisted.


The Camden County couple said they first took said picture as part of an interview with the Associated Press. They had agreed to talk about issues relating to their trauma and difficulties in having a baby.
Three years later, the Reynolds' were in for a big shock. E! Entertainment’s reality TV spoof, “The Soup” had used that same picture but instead of portraying the Reynolds in a sympathetic light, it was being used to mock them. The newly twisted graphic showed the Reynolds surrounded by tattooed babies in lingerie.
The couple has since filed suit, claiming defamation and how the “photoshopped” image has battered them emotionally.
MORE BIG NEWS, SHORT ITEMS IN THE PHILLY NEWS
Posted by Crime Scene USA at 7:46 AM